To communicate, argue, and persuade, facts need to be described or defined in context and both questions and answers must be specific.

For example, take “the date” of the U.S. Constitution.  There are many significant dates. To get a true (specific) answer, specific questions must be asked, and, in turn, the answer must be specific.

1.  From May to September 17, 1787, the delegates to the Constitutional Convention met and wrote the proposed constitution; delegates from 12 states [Rhode Island did not send delegates] approved it and recommended to the Congress [of the then-existing federal government, the Articles of Confederation] that it be adopted by ratification of nine of the 13 states..

2.  By June 21, 1788, nine states had ratified the U.S. Constitution.  According to the US Constitution Center, on this date, the Constitution became the official framework of the government of the United States of America.

3.  On March 4, 1789, the House of Representatives met but did not have a quorum.  The US Senate also met that day, but also without a quorum.

[On April 1, 1789, the House of Representatives first achieved a quorum and elected its officers.]

[On April 6, 1789, the US Senate first achieved a quorum and elected its officers.]

4.  On April 30, 1789, George Washington was inaugurated as the first president under the U.S. Constitution.

Specific question for the above:  When did the first US president take office?

Posted by Patricia A. Petow at 2:09 PM No comments: 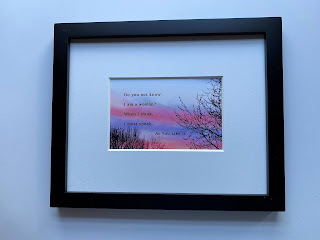 At https://www.etsy.com/shop/bostunphoto you will find downloadable wall art for purchase for your own personal use.  You can make prints in popular frame sizes on your own printer (using the “fit to page” setting) or by way of an online service of your choice.  You will have access to high resolution jpg digital files in five common file ratios.

Some Covid19 and vaccine reading:

Posted by Patricia A. Petow at 8:21 AM No comments: